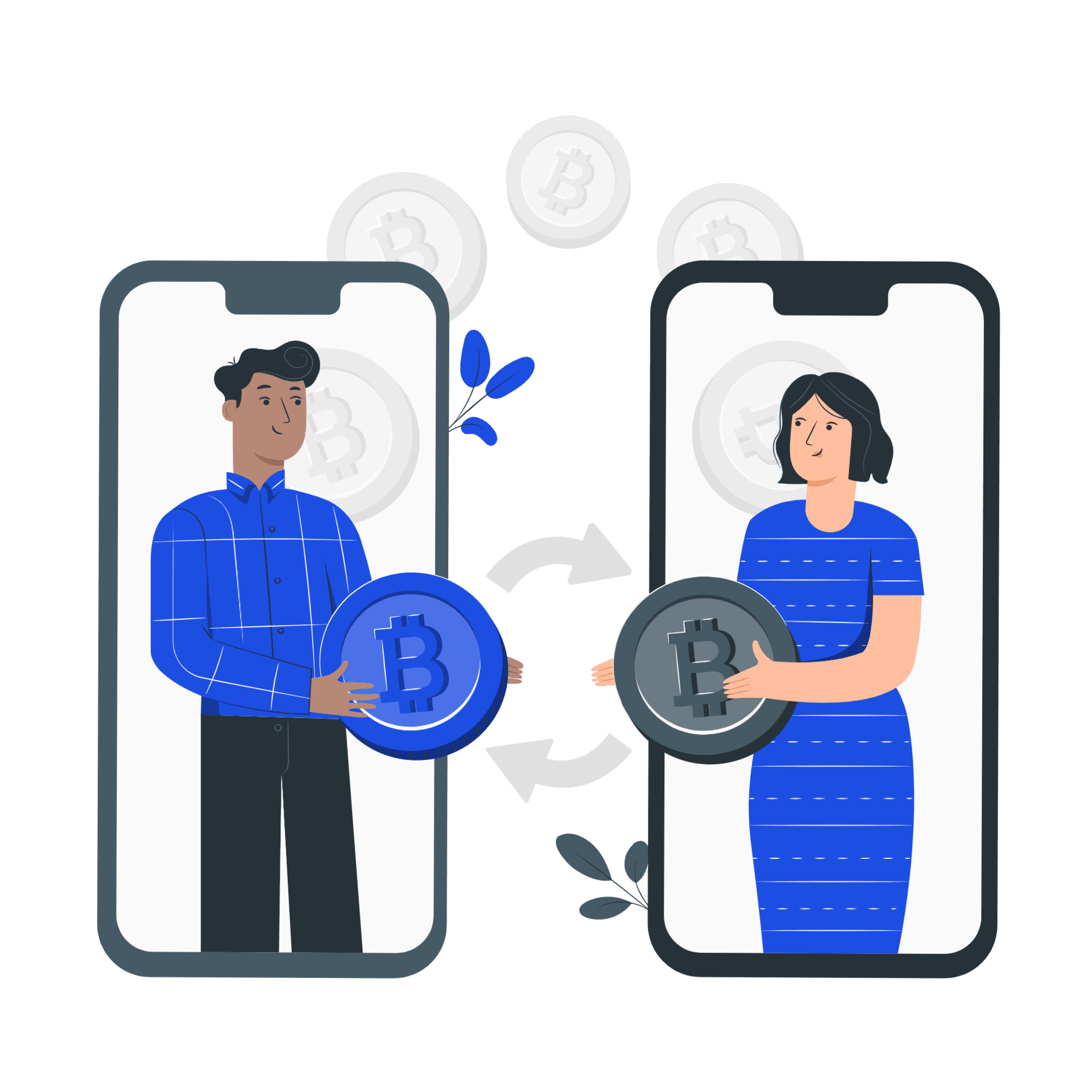 What is Bitcoin ? Simply explained

Bitcoin is a digital and decentralized currency. The blockhain enables a censorship-resistant peer-to-peer network. Learn more about the function and technology behind Bitcoin in this article.
27.06.2022
Basics | Crypto | Crypto knowledge
15 min

What is Bitcoin (BTC)?

Bitcoin is a digital, decentralized and censorship-resistant currency. It does not physically exist and is not regulated by any central authority such as a bank, state or company. Here, transactions are sent transparently directly between people, also called peer-to-peer network.

Bitcoin, also abbreviated BTC, is the largest cryptocurrency in terms of market capitalization and trading volume. The first Bitcoin was created back in 2009. All other cryptocurrencies follow the ideology and technological basis of Bitcoin.

Created due to the financial crisis in 2007, BTC was created to act as an inflation-proof means of payment. At the present time, it is increasingly used as an investment product and is in steady growth.

Inhaltsübersicht
What is Bitcoin (BTC)?
How does Bitcoin work?
What is the most important feature of Bitcoin?
What is Bitcoin used for?
Bitcoin advantage and disadvantage
What gives Bitcoin its value?
How can I buy Bitcoin?
Future & share price development
Further reading

How does Bitcoin work?

The Bitcoin Whitepaper by Satoshi Nakamoto

The concept and ideology of Bitcoin was published in 2008 in an eight-page white paper, under the pseudonym Satoshi Nakamoto. Which person or group is really behind the development of Bitcoin is not known until today.

In this context, the concept of the white paper has established itself as a standard for recording the function and application of a cryptocurrency in writing.

Bitcoin, like other cryptocurrencies, is based on blockchain technology. A blockchain serves as a decentralized network whose transactions between users are transparently logged. No country, company or bank has control over the network.

Technically, the blockchain consists of blocks, which in turn contain user transactions. As soon as a new block is appended to this chain, it thus becomes part of the blockchain. Deeper blocks cannot be removed from this chain. Due to this principle, transactions cannot be manipulated or reversed retrospectively.

What is Bitcoin Mining?

Bitcoin mining is the process of solving a complex mathematical problem of a new block of data on the blockchain. This action validates transactions of the data block and adds them to the network. The blockchain has thus grown by one block.

The task is solved by so-called miners. It is an allusion to prospecting for gold. Miners replace the banking system, which usually controls and forwards money transfers. In the process, miners compete strongly with each other. This is because only the first miner who solves the task receives new bitcoins from the network as compensation. This type of transaction control is called “proof of work.”

In the early days of Bitcoin, it was possible to mine Bitcoin with a private computer. However, as the difficulty increases, it is no longer feasible. The reasons for this are high hardware costs, rising electricity costs and immense competitive pressure.

To send and receive Bitcoins, you need a Bitcoin wallet. The wallet consists of the public key and the private key. The Bitcoin address is a short form of the public key. It acts as the address to which Bitcoins are sent, comparable to a bank's account number.

The public key shows which transactions have been made and how many Bitcoins are currently on the wallet. However, which person owns the address is not apparent in theory.

The Private Key serves as the password for the wallet. Bitcoins can only be sent with a private key. If you lose it, it is technically impossible to access your wallet. The Bitcoins are lost forever. It is elementary never to share your private key. Also, a support employee will never ask for a private key.

What is the most important feature of Bitcoin?

Cryptocurrencies can differ greatly from each other in their technology and use.

Transactions are secured by a cryptographic process, encryption of data. It is not feasible at this time to forge wire transfers that have been deposited in the network. However, the possibility of a 51% attack exists. It is very low, because the cost factor of the attack would exceed the possible gain.

The cost and speed of execution vary

The cost of a transaction depends on the utilization of the network. The sender can determine for himself what fee he is willing to pay. Increasing the fee creates an incentive for miners to bring the transaction forward. This speeds up the execution if time is an important factor in buying or selling.

Depending on the workload, a transaction costs between €1.00 and €4.00 with an execution time of five minutes to one hour.

Due to the high number of over 10,000 mining nodes, Bitcoin has a decentralized structure. A mining node is a node that keeps the entire blockchain and participates in the mining process. Each mining node has an exact copy of the blockchain. This means no central authority has control over the network, transactions or wallets.

Accounts cannot be frozen, transfers stopped, or people denied access to the network. Due to the high number of mining nodes, it is statistically almost impossible to destroy the blockchain.

The number of bitcoins is limited

The absolute number of Bitcoins is fixed at 21 million. It is not possible to create more Bitcoins. The number of new Bitcoins is also continuously decreasing. The last Bitcoin will be mined in the year 2140. Both of these characteristics are one reason why Bitcoin is considered inflation-proof.

Bitcoins can no longer be sent on the network due to the loss of the private key. The number of Bitcoins in circulation is effectively lower as a result.

Confirmed payments within the Bitcoin network cannot be reversed. There is no central authority that can intervene in the event of erroneous transfers. Participants in the network must themselves ensure the accuracy of their transactions.

If Bitcoins are sent to a wrong address, they can only be returned by the goodwill of the recipient. The recipient is not required to do so by any law or instance.

Bitcoin is a pseudonym

Transactions are transparently logged, but cannot be assigned to a real person. This property is summarized under the term pseudonymity.

In theory, this makes each participant anonymous. However, due to government regulations, this is no longer the case in practice.

“Know your customer” (KYC) has been introduced for many crypto exchanges. In this process, exchanges collect information about their customers and deposit it at the Bitcoin address provided.

Thus, the identity behind a Bitcoin address can be revealed. The reasons for this lie in the fight against crime.

What is Bitcoin used for?

Bitcoin as a means of payment

Bitcoin is intended to function as a global and free means of payment. Nowadays, goods and services can already be purchased with Bitcoin. The acceptance of cryptocurrencies among online stores is also steadily increasing.

Bitcoin is on the verge of establishing itself as an official government payment method. The Central American state of El Salvador did so as early as 2021.

Likewise, credit cards are offered for crypto enthusiasts. These are linked to the deposited cryptocurrency wallet. When the credit card is used to make a payment, the cryptocurrency is sold in the background at the current rate. You can find this offer at platforms like Coinbase or Crypto.com.

Due to high price fluctuations, we currently advise against using Bitcoin as the main means of payment.

Bitcoin as an investment instrument

Spectacular return opportunities of over 10,000% are no longer possible with Bitcoin. However, in direct comparison with alternative forms of investment such as stocks or ETFs, BTC offers a considerable return opportunity.

Bitcoin as a store of value

In the crypto space in particular, Bitcoin is seen as “the store of value.” The price of BTC is falling and not rising as much as in the past. Regulations have created a legal framework that now allows institutions to invest capital as well. This increases the volume of trade and thus price stability.

In direct comparison with other cryptocurrencies, Bitcoin has narrower price fluctuations and therefore performs better in a bear market.

What gives Bitcoin its value?

Bitcoin's performance, like that of other global currencies, is based on the principle that it is accepted as a useful and convenient method of payment.

The currency can be exchanged for goods and services. BTC is easy to send and divisible into smaller amounts (one bitcoin equals 100,000,000 so-called satoshi).

Like the Euro and USD, cryptocurrencies, with few exceptions, have no real equivalent value. The population believes in the currency as a means of payment. Gold, on the other hand, has a real value.

Bitcoin has advantages over government-sold currencies.
The number of Bitcoins is limited to 21 million. As the number of participants in the network increases, so does the demand. The supply remains relatively constant, or more precisely, it increases less with each passing day. The reason for this is that new Bitcoins cannot be mined forever and in the same amount.

Due to the increased demand and limited supply, the value increases.

How can I buy Bitcoin?

Bitcoins can be purchased on countless crypto exchanges. At the same time, the conditions for buying and selling cryptocurrencies differed greatly. Reputable providers are E-Toro, Binance or Crypto.com.

Bitcoin is the oldest and largest cryptocurrency in terms of market capitalization and trading volume. This makes it the golden spearhead of cryptocurrencies. The course has been spectacular since its launch, creating millionaires out of thin air.

By return, Bitcoin is the highest-yielding asset of the last decade. However, as market volume increases, price volatility decreases. Given that, the profit is lower but the loss is higher unlike altcoins.

Regulations and new laws also tend to focus on Bitcoin, as it exerts the most influence on the crypto market.

In recent years, Bitcoin has been criticized for its high power consumption. According to the
Cambridge Center for Alternative Finance
(CCAF), electricity consumption for the Bitcoin network is currently 125 TWh per year.

In relation to global energy consumption, this corresponds to a whole 0.59 percent. However, mining companies are already switching to low-cost, sustainable green energy.

Inhaltsübersicht
What is Bitcoin (BTC)?
How does Bitcoin work?
What is the most important feature of Bitcoin?
What is Bitcoin used for?
Bitcoin advantage and disadvantage
What gives Bitcoin its value?
How can I buy Bitcoin?
Future & share price development
Further reading